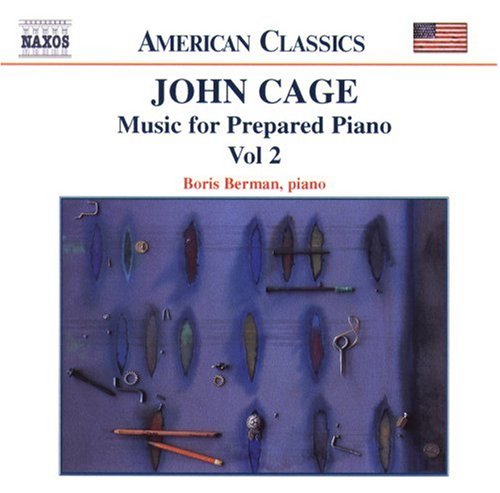 The twelve works featured on this disc were all composed over a six-year period, 1942 to 1947 The Perilous Night (1944) features an enormous range of timbres with each of its six movements possessing its own distinct mood, such as the moto perpetuo second movement or the fiendish rhythmic complexities of the concluding sixth movement. The changing metrical stresses and melodic characteristics of Tossed as it is Untroubled (1943), dedicated to Merce Cunningham, endows it with a peculiar folk-like quality. For the nineteen continuous sections of the ghostly Daughters of the Lonesome Isle (1945) the piano requires a particularly complex preparation involving a total of thirty-nine pitches. The work was composed for Jean Erdman, and the intermittent use of spread chords and glissandos is extremely effective. The singular Root of an Unfocus (1944), again dedicated to Cunningham, is followed by Primitive (1942), whose beguiling legatissimo opening melody of which could not provide a starker contrast to the orgiastic climax. The extraordinary sound world of Mysterious Adventure (1945) evokes any number of instruments including woodblock, marimba, xylophone and steel pan. The turbulent And the Earth Shall Bear Again (1942) demonstrates a close kinship with the explosive Primitive composed the same year. The Unavailable Memory of (1944) represents its polar opposite: static and contemplative, it is written entirely in the bass clef and consists of various arpeggiations of the same five pitches. In Music for Marcel Duchamp (1947), written for the Duchamp sequence of the film 'Dreams That Money Can Buy' (Hans Richter), silence assumes an almost thematic function, whilst the repeating melodic cells and ostinato patterns of Totem Ancestor (1943) and A Room (1943) offer an intriguing foretaste of Minimalism. This remarkably varied collection is rounded off by the crystalline beauty of the tiny Prelude for Meditation (1944).

John Cage abdicated his role as composer around 1950 to become a bystander as random sounds went by. Before that, he wrote some of the most fascinating music produced in America. Some of Cage's best early music was written for percussion ensembles. When the limited space at a dance performance forced him to become an inventor, he thought up a one-man percussion ensemble: the "prepared piano," a standard piano altered by clamping objects onto the strings. The music on this disc covers a wide range of moods and temperament, from the ghostly "Daughters of the Lonesome Isle" to the aggressive "And the Earth Shall Bear Again." Most of the pieces are imaginative enough to stand up to repeated listening. Boris Berman, a Russian-born pianist who now runs Yale's piano department, is better known for playing music like Scriabin and Prokofiev. But he seems completely in command of this radical idiom, with only a bit of rushing here and there keeping him from perfection. With its vivid sound and fascinating repertoire, this disc is another notable Naxos bargain. --Leslie Gerber

10/10: Boris Berman's second Naxos release devoted to John Cage's piano music presents a handsome cross-section of the composer's prolific output from the 1940s. For most of his prepared piano music, Cage gave meticulous instructions as to the manipulation of the piano's strings with rubber wedges, screws, bolts, and other implements. The ensuing sonorities transform the piano into a one-man percussion ensemble, with a heavy Gamelan accent. Yet no two pianos prepared in the same way ever sound alike. Each recorded version of a Cage prepared piano work differs in timbre. In Cage's 1944 Root of an Unfocus, for instance, Steffen Schleiermacher (on MDG) conveys a stark, interrogation-room-like aura through the deep resonance of his left-hand 'drumbeats' and buzzing right-hand stabs. By contrast, Boris Berman's latest recording on Naxos suggests a smaller, muffled drum, and more rounded right-hand interjections.

Primitive's dancing rhythms stay on a steadier track in Berman's performance, yet Schleiermacher's softer-grained reading conveys less of a pitch range. Perhaps the most obvious differences are found in The Unavailable Memory Of, which employs only three pitches. Schleiermacher's preparations render the notes as B-flat, F, and D: a major triad. With Berman, we hear an E-flat rather than a D, as well as a slower basic tempo. And compare Schleiermacher's murky, mysterious sounds in A Room, to Berman's simpler, funkier palette. The point is that both Berman and Schleiermacher understand and play this music fantastically well. Of course, Berman has the advantage of Naxos' budget price and slightly better sound...Listeners new to Cage's prepared piano oeuvre will be enchanted by the variety, humor, and beauty that typifies Berman's program. Solidly recommended. --ClassicsToday.com, Jed Distler

Although Cage is important more for his theory than for his actual music, his output for a piano manipulated with nails and weather stripping is fascinating, delivering a proto-electronica sound and beat. Critic's Pick --Andrew Druckenbrod Pittsburgh Post-Gazette, July 2003

You can Share this fragrance with your better half

Stop putting it off get in shape

Herb up your life!

Do it in style

Dresses that won't make you break a sweat

All Game, All Season

It's time to play

All of the best that playstation has to offer

We'll find you the best weapon to dominate them all

A Trip down the memory lane

A nostalgic homage to the good old games

Make it a camping season all year round

It's about the journey

Smokey shadow look or hot hues on your date night, there is something for everyone

Amp up your look with these lipsitck collectiosn dramatic shades, vibrant colors, and super-rich finishes!

Find your miracle product in here

Looking for a work machine to crunch those number or just something to netflix and chill. This list is it

Only hear what you want to

We lined up the top-rated Noise-Cancelling Headphones

So many books, so little time

Absorb the pathway of history

Experience what other's lived through

Welcome to the Grind

Cricket or Football? We got it all

Stretch your body, not your wallet

You can't be bored with these board games

Monopoly to ludo, snakes and ladders to checkers, we have it all

Woody or Buzz Light Year? hundreds more of your heroes in here

Paintings that reflect you