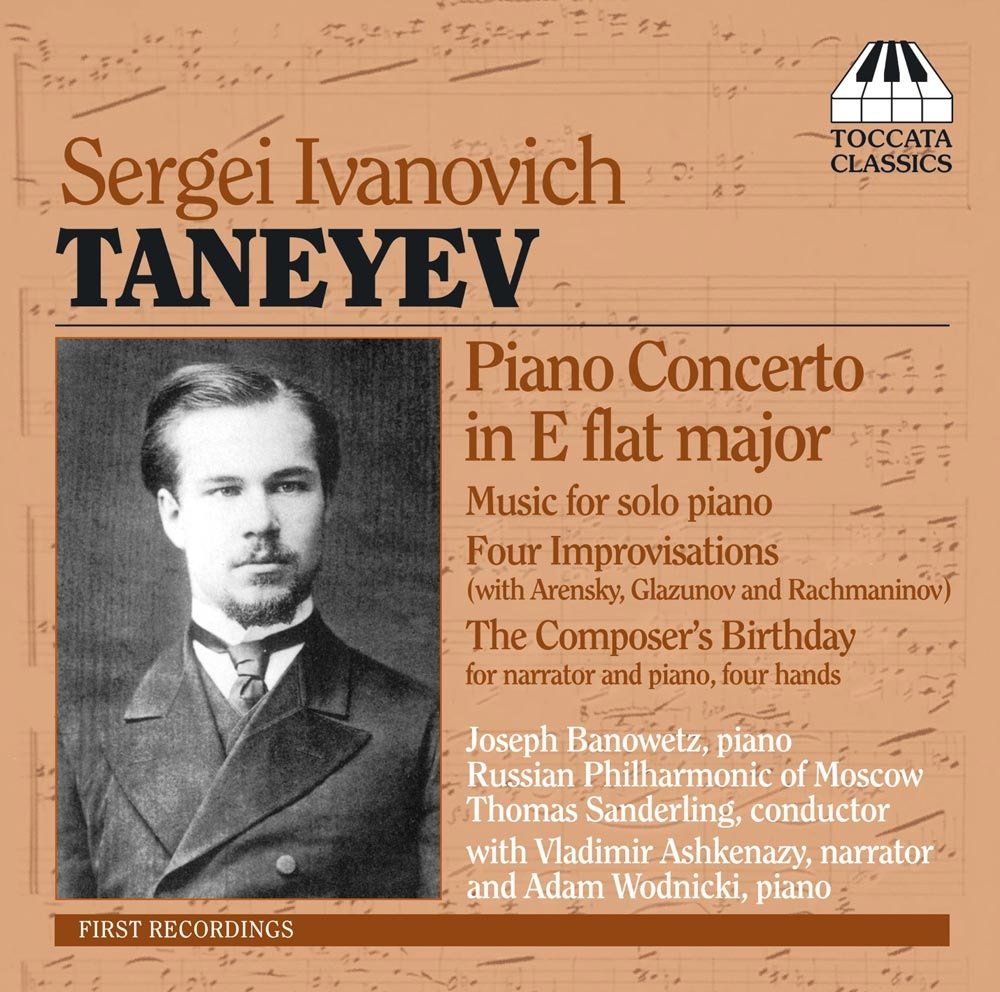 The piano music of Sergei Taneyev (1856-1915) is one of the hidden secrets of Russian music. Student and friend of Tchaikovsky, Taneyev was called "a formidable pianist and composer of the first rank," but he has never had the attention he deserves. This CD couples a first-ever recording of the only two movements he completed of his youthful piano concerto with more premiere recordings of music for solo piano from across his career, most of them first recordings. Since the Improvisation - composed jointly by Taneyev, Rachmaninov, Arensky, and Glazunov - is a first recording, it provides premieres by all four composers! This recording is published to mark the 150th anniversary of the birth of Sergei Tanyev, on November 13, 1856. The Birthday Joke is a ballet parody, featuring narration from famous pianist Vladimir Ashkenazy, reading a text that is satirical stage directions for the ballet's characters. Another exciting release from the one label dedicated to recording unjustly neglected repertoire.

"h3"Review "p"Joseph Banowetz plays with colour and persuasiveness, if not always with a maximum degree of imaination -- "i"International Piano, January/February 2007"br""br"The piano writing [in the Piano Concerto] is intense and rich -- "i"International Piano, January/ February 2007"br""br"This is an extremely worthwhile disc to explore -- "i"International Piano, January/February 2007
"h3"About the Artist "p"The American pianist "b"Joseph Banowetz has been described as by "i"Fanfare (USA) as 'a giant among keybord artists of our time', by Russia's News (Moscow) as 'a magnificient virtuoso who amazed the public by his deep understanding of the composer's spirit', and by Ruch Muzyczny (Warsaw) as 'a virtuoso in the noblest sense of the world'. Banowetz is a graduate with first prize of the Akademie fur Musik und Darstellende Kunst in Vienna; his teachers have included Carl Friedberg (a pupil of Clara Schumann) and Gyorgy Sandor (a pupil of Bela Bartok).
Banowetz has been heard as recitalist and orchetral soloist in over 35 countries, with performances with the St Petersburg Philharmonic, Moscow State Symphony, the Prague and Bratislava Radio Orchestras, the Budapest Symphony, the Concert Society Orchestra of Barcelona, and the Hong-Kong Philharmonic Orchestras. In 1992 he was awarded the Liszt Medal by the Hungarian Liszt Society in Budapest, in recognition of his outstanding performance of Liszt and the Romantic literature.
Joseph Banowetz has recorded thirty compact discs for the Naxos, Marco Polo, Warner and Altarus labels, the works including the Tchaikovsky First Concerto, both Liszt Concertos and Totentanz, both d'Albert Concertos, the Huang Concerto No.1, the world-premiere recordings of all eight of the Anton Rubinstein works for piano and orchestra. One of the Rubinstein piano-and-orchestra series was named by "i"Fanfare as an outstanding international release for 1993. "br"The first part of "b"Vladimir Ashkenazy's long life as a musician was devoted to the piano. Building on his studies in Moscow and successes in the Chopin, Queen Elizabeth and Tchaikovsky competitions, he spent three decades touring the world with an ever-growing repertoire and building one of the most comprehensive recording catalogues of our day.
From the 1970s, he became increasingly active as a conductor, holding positions over the years with the Philharmonia, Royal Philharmonic and Cleveland Orchestras. Since 1998, he has held the posistion of Chief Conductor of the Czech Philharmonic Orchestra, and in spring 2006 he took up the positions of Music Director of the European Union Youth Orchestra and Conductor Laureate of the Philharmonia Orchestra. Alongside these conducting activities, he continues to perform in recital worldwide and to add to his recording catalogue with releases such as the critically acclaimed complete Shostakovich 24 Preludes and Fugues, Op. 87.

A collection of powerful productivity apps you can use anywhere. Organize your life, expand your creativity, and protect what’s important.

Get productive quickly with these Microsoft 365 videos, tutorials, and resources.

Explore the latest tips to get the most from your Microsoft products.

GET TIPS FOR WINDOWS, SURFACE, & MORE

Learn more about accessibility features and personalize your PC settings.

Windows updates will help you manage your time, increase security, and get more creative with Windows 10.