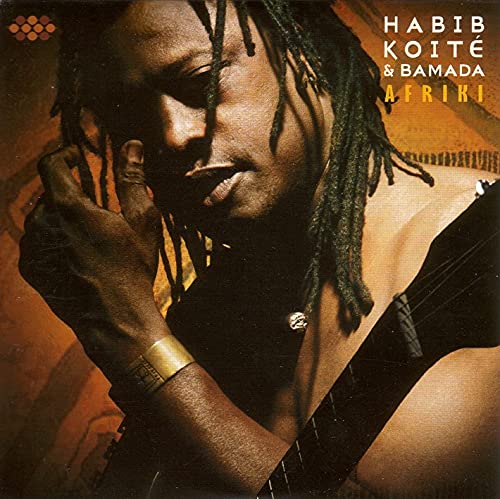 After a six year absence from the recording studio, Malian guitarist Habib Koite and his band Bamada return with a stunning new album. AFRIKI finds the group in fine form, and features an appealing set of songs that reflect Habib's unique approach to the diverse styles of Malian music.

"h3"From the Artist "p"It seems ironic that an album that was recorded on three continents finds Habib focusing so intently on his roots. As always, Habib takes a unique pan-Malian approach, drawing on a wide range of cultural expressions from the diverse regions of his native land. A number of guest musicians added new flavors to the group's sound. For the first time, Habib invited female singers to lend their striking tonality to his compositions. Hassey SarrÃ©, the late violinist for Ali Farka TourÃ© and Afel Bocoum's, contributed haunting melodies and ornaments on "Barra". On the song "Nta Dima", Habib invited a troupe of traditional animal horn trumpet players in an effort to expose a fading musical legacy.


The overarching theme of Afriki, which means "Africa" in the Malian Bambara language, is about the strengths and challenges of Mali in particular and the African continent in general. He speaks to a young generation of Africans in the hopes of convincing them to cherish their traditions and recognize the positive aspects of life in Africa.

Malian guitarist Habib KoitÃ© is one of Africa's most popular and recognized musicians. Habib KoitÃ© was born in 1958 in ThiÃ¨s, a Senegalese town situated on the railway line connecting Dakar to Niger, where his father worked on the construction of the tracks. Six months after his birth, the KoitÃ© family returned to the regional capital of west Mali, Kayes, and then to Bamako. Habib comes from a noble line of KhassonkÃ© griots, traditional troubadors who provide wit, wisdom and musical entertainment at social gatherings and special events. Habib grew up surrounded by seventeen brothers and sisters, and developed his unique guitar style accompanying his griot mother. He inherited his passion for music from his paternal grandfather who played the kamele n'goni, a traditional four-stringed instrument associated with hunters from the Wassolou region of Mali. "Nobody really taught me to sing or to play the guitar," explains Habib, "I watched my parents, and it washed off on me."

Habib was headed for a career as an engineer, but on the insistence of his uncle, who recognized Habib's musical talent, he enrolled at the National Institute of Arts (INA) in Bamako, Mali. In 1978, after only six months, he was made conductor of INA Star, the school's prestigious band. He studied music for four years, graduating at the top of his class in 1982. (In fact his talent was so impressive, that upon graduation, the INA hired him as a guitar teacher). During his studies, Habib had the opportunity to perform and play with a series of recognized Malian artists, including KÃ©lÃ©tigui DiabatÃ© and Toumani DiabatÃ©. He sang and played on Toumani DiabatÃ©'s 1991 release Shake the World (Sony), and KÃ©lÃ©tigui DiabatÃ© is now a full-time member of Habib's band.

Habib takes some unique approaches to playing the guitar. He tunes his instrument to the pentatonic scale and plays on open strings as one would on a kamale n'goni. At other times Habib plays music that sounds closer to the blues or flamenco, two styles he studied under Khalilou TraorÃ© a veteran of the legendary Afro-Cuban band Maravillas du Mali. Unlike the griots, his singing style is restrained and intimate with varying cadenced rhythms and melodies. "br"

"p" Mali has rich and diverse musical traditions, which have many regional variations and styles that are particular to the local cultures. Habib is unique because he brings together different styles, creating a new pan-Malian approach that reflects his open-minded interest in all types of music. The predominant style played by Habib is based on the danssa, a popular rhythm from his native city of Keyes. He calls his version danssa doso, a Bambara term he coined that combines the name of the popular rhythm with the word for hunter's music (doso), one of Mali's most powerful and ancient musical traditions.

Insider tips for your trip to Vienna

Vienna - a city of proud palaces and peaceful parks; a home to Klimt and Kaisers, coffee and cake, Strauss and Sisi. And sausages.

Hundreds of articles take you through the sights, sounds and tastes of the city, so you can plan your trip better and make the most of your visit.

I'm Mark - an English writer who's lived in Vienna for over 25 years. Allow me to introduce you to the wonders of Austria's capital.

What to do in September

Egon Schiele and his legacy

What can you do in a day?

If you're only passing through Vienna for a day, here some suggestions for places to visit and things to do ...
Read More