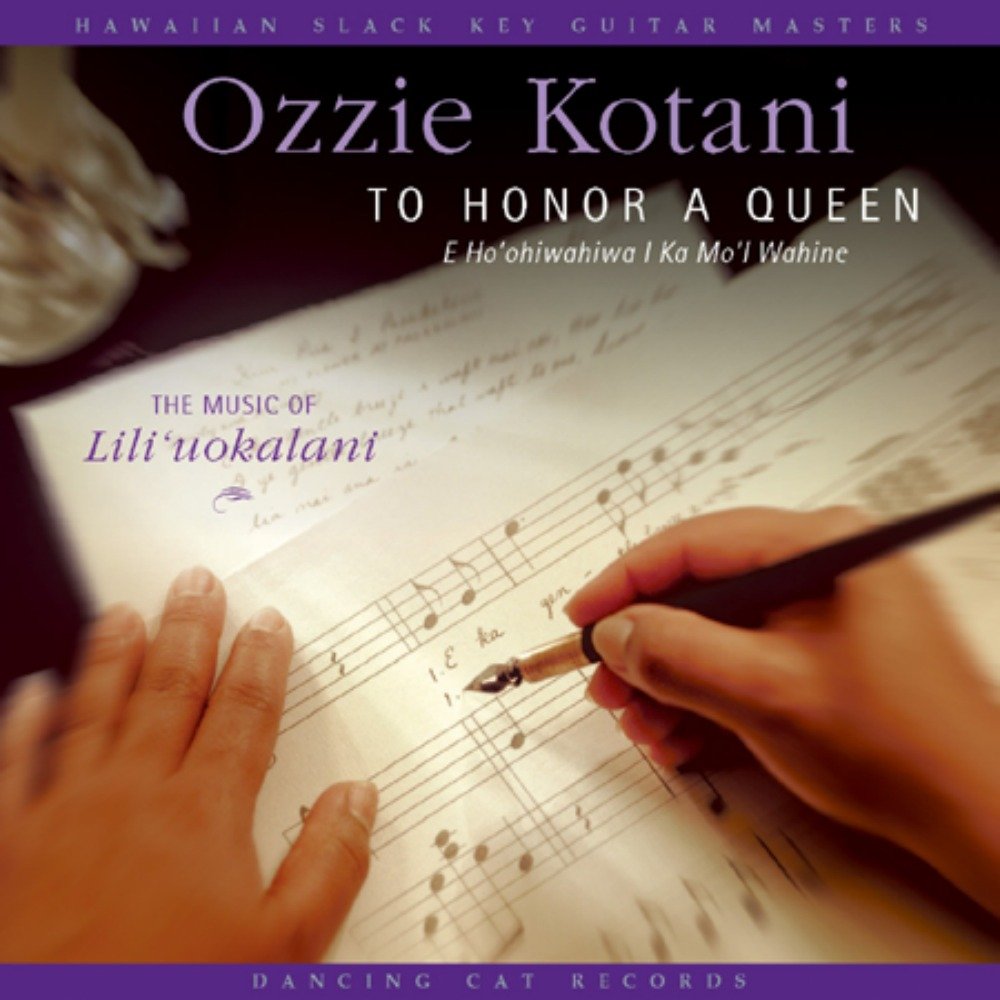 Hawaii's Queen Lili'uokalani was also a prodigious composer, penning more than 150 songs that attempted to capture the essence of her kingdom during her lifetime. So it's only apt that master player Ozzie Kotani should interpret some of her work instrumentally through the national slack-key guitar style. Even without words, the pieces turn out to be rich and full, whether the bell-like tones of Moanalua; or the beauty of Aloha 'Oe, a song forever associated with Hawaii and here given an interesting treatment by Kotani, who slows the pace to that of a languid Pacific sunset. Lili'uokalani obviously loved melody, and in Kotani, she has a sympathetic champion who plays her work with thought and adoration. George Winston's crystalline production adds wonderful depth, and the entire album is a refreshing, even spiritual experience. --Chris Nickson

There haven't been too many crowned heads who could write a song, but Hawaii's Queen Lili'uokalani was an exception. A woman who lived in the late 19th century/early 20th century, she played several instruments, including guitar, and composed over 150 songs during her lifetime, including Aloha 'Oe, probably the archetypal piece of Hawaiian music. Revered by musicians from the islands, 13 of her pieces are given instrumental slack-key treatments here by Ozzie Kotani, a master of the genre. While he begins with the up-tempo He' Ai Na Kalani, the pace soon slows to a more laid-back feel which brings out the beauty of the melodies -- and the queen wrote some that were gorgeous. Medley: Paoakalani/Kuiu Pua I Paoakalani finds the notes and harmonics ringing like bells, The Queen's Prayer is simple but heartfelt, and the version of Aloha 'Oe that Kotani puts forth here -- adapted from the original with a new introduction and passing chords -- is a thing of wonder, the tempo slowed to the point where it truly captures the languid, hanging tropical sunsets of the islands. Making a single guitar have all the colors and textures of an orchestra is Kotani's triumph and what he brings to the party, but the power of the music itself stems purely from Lili'uokalani. --All Music Guide

Rarely does a whole become greater than the sum of its parts, however, that may be what has occurred in the creation of the recent Dancing Cat CD titled To Honor a Queen (E Ho'ohiwahiwa I Ka Mo'l Wahine). The parts in this case, are the songs of Hawaiian Queen Lili'uokalani, the tradition of ki ho'alu (Hawaiian slack key guitar), and guitarist Ozzie Kotani. All selections on the CD are, of course, the compositions of Lili'uokalani, however, Ozzie has added introductory and/or bridge material to a number of the songs, and improvised on many, in keeping with slack key tradition. His unique style and distinctive four-finger picking has created a fresh interpretation of the beautiful melodies and complex harmonies originally written for vocal performance. Relative to an instrumental performance of a song that has lyrics, Ozzie says, the elements of [the words] must be kept in the music...so I try to phrase it in the manner that words would be sung. To Honor A Queen includes thirteen instrumental arrangements of the Queen's most beautiful melodies, ranging from standards like Pauahi 'O Kalani, Aloha 'Oe, and The Queen's Prayer, to rarities like Moanalua, recorded for only the second time. The overall effect represents the best of slack key - played from the heart and soul through the fingers, flowing with vivid, warm tropical images that transcend the islands to express universal feelings. Tropical surroundings, oral histories and anecdotes, and island aloha are all recurrent themes in Hawaiian songs, and slack key guitar pieces in particular. Hawaiian songwriter, Dennis Kamakahi, has said of Queen Lili'uokalani, [she] and I have one passion, that is, the passion to write what we see and hear around us and transform these images into music.Whether relating events in royal family life (He'Ai Na Kalani), describing the beauty of the rainforest (Liliko'i), or exhibiting the Hawaiian love for poetic ambiguity (Ka 'Oiwi Nani), the queen's songs, the evocative nature of slack key, and Ozzie Kotani's interpretations create that transformation. --Folk amp; Acoustic Music Exchange

Join in with your specialty via the ANESTHESIOLOGY® 2021 Virtual Track.

American Society of Anesthesiologists Named a Best and...

Discover emerging knowledge from the latest literature with Summaries of Emerging Evidence (SEE). By aggregating content from more than 30 international medical journals, SEE allows you to stay plugged in to the most important advances.
Purchase Details
Quickview
Patient Safety

Re-energize your education, your network, and your spirit in San Diego as we take learning and networking back offline.
ASA Event

Help ASAPAC advance the profession at the federal and state level. TAKE ACTION

Your resource for quality reporting, management and improvement. Learn more